The Lineolated Parakeet comes in many different colors, also known as mutations.  There are two different series of mutations known as the Green Series and the Blue Series.  Other variations of those mutations also exist and all will be described below.

Ino (Creamino and Lutino) greywings are rarely available, and have only been recently produced by breeders.

Several examples of the the Greywing color variations in Single Factor and Double factor:

Females cannot be Double Factor, as is described in the text above.

Single Factor is often abbreviated as SF, and Double Factor as DF.

Birds can also be split to a mutation meaning that they carry the mutation, but do not express the color visually.  When two split birds are bred together they have the possibility of producing the mutation visually in their offspring, if the parents carry the same type (color) split.  Female linnies can only be split to turquoise (blue), while males can be split to turquoise (blue) and/or ino.  Your bird may also have NO splits.  Test breeding is the correct method to diagnose the presence of splits.

Several online Genetic Calculator Tools have been created and are used to virtually evaluate offspring mutation possibilities from test breeding.

Recessive:  A recessive trait will be masked by dominant traits unless the offspring inherits a copy of the recessive gene from BOTH parents.

Sex-Linked:  The Ino genes are sex-linked and an ino split may only be carried by a male bird.  To have an Ino phenotype the offspring must inherit one copy of the ino gene from EACH parent.  This may happen, e.g. by breeding a Green split ino Male X Lutino Female.  Greywing mutations are also sex-linked but in a different manner.

Incomplete Dominance:  Incomplete dominance occurs in the Greywing mutation.  Incomplete dominance basically refers to the expression of the phenotype.  The main trait (Green, D Green, DD Green, Turquoise, … etc.) is not able to be fully expressed and the bird’s overall color appears mildly or largely diluted. 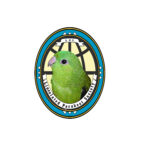 The Society strongly supports and encourages the proper breeding of Lineolated Parakeets with the following recommended breeding protocol:

All mutations: turquoise, ino, greywing should be paired with a green series mate (normal, d green or dd green) at least every other generation to keep the species strong.

Pairing red-eyed birds together (such as lutino and creamino) is NOT recommended.

According to European breeders, feather structure has been negatively impacted by the following pairings and they also are NOT advised: DD to DD and Greywing to Greywing.

“It’s Not Easy Being Green” Project

Newer, non-wild mutations (every color but Normal Green) have been largely expressed in United States Lineolated breeding programs.  For this reason, the wild, normal green mutation is becoming more and more rare in the United States Stock.  It is a goal of the LPS to propagate breeding of the wild color and to support a healthy stock of Normal Greens for strong breeding programs.  Several members of the LPS have been delegated to head this program.  You can read more about the  “It’s Not Easy Being Green” Project by CLICKING HERE! (Page still under construction!)

Click the poster to find it in the LPS Shop!

Caring for Your Linnie

A single Linnie can be housed in a 24 inch cage provided you are giving him “outside of the cage” time.

Linnies need a varied diet. They tend to get a little plump especially if they can’t get enough exercise. However, do not exclude seed from the diet. Limit sunflower and other fattening seeds. Linnies enjoy a variety of fruits and vegetables such as : apple, orange,...

Hand taming, domesticating and learning the behavior patterns of these special little birds will be easier for you if you take the time to do the ever important research. Learn about their habitat, environment, eating and drinking needs, social needs, health concerns, etc.


The Lineolated Parakeet is becoming very popular as a hand raised, hand fed pet. This allows for a pet...