A single Linnie can be housed in a 24 inch cage provided you are giving him “outside of the cage” time. If the wings are clipped make sure he has a play stand with plenty of toys. If your Linnies’ wings are not clipped, make sure he has a safe environment to fly in and always be there to supervise when your bird is out of the cage.

One of linnies’ favorite activities is bath-time.  You can give your linnie a shower using a spray bottle that produces a fine, luke-warm mist.  Do not soak the bird and DO make sure that your linnie has a warm, draft-free environment in which to spend time preening and drying off.

Please see the page on Linnie Nutrition for information on an appropriate diet for linnies!

Linnie nails grow very fast and need clipping fairly often. You can use a small pair of nail scissors to trim but be careful not to cut the quick. If bleeding occurs try to stop it quickly; styptic works well but so will flour or cornstarch. Apply pressure to the nail for a minute or two until the bleeding stops. Keep an eye on him for the next hour or so to make sure bleeding doesn’t start up again. 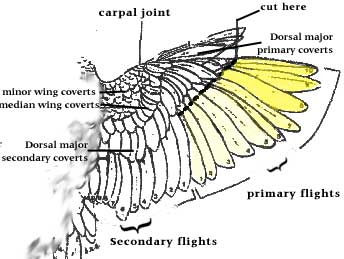 There are many arguments both pro and con for trimming birds’ wings. Some feel it is most natural to allow the bird to have flight in the home. While I admit I enjoy having my pet birds being flighted so that they can fly to me or from cage to play gyms, then to me, I must warn that there are certain dangers inherent in allowing them to be fully flighted. There have been some bird owners that have lost their birds due to a door being opened, or to a bird flying into a window or a mirror, and breaking their necks. Others have fallen into an open toilet, or sink of water. Some have been accidentally sat on by their owners because they like to burrow under couch cushions, or stepped on. These are devastating incidents and the consequences must be weighed in your decision. I have spent hours looking for a bird in the house, only to find it asleep on a high shelf, or curtain rod.

I once lost a pet Macaw when I walked outside with him on my shoulder! He had gone out with me dozens of time; to the mailbox, to the garbage dumpster and to visit neighbors. This particular day a flock of pigeons flew by, just as we were going down the outside stairs. It seemed that they startled my bird, which jumped off my shoulder and took off over the roof top before I could move! His wings had been trimmed, but a few of them had started to grow out, and it was enough for him to fly very high and fast. I was extremely lucky and determined to retrieve him and did recover him several hours later. The moral of this story is even though the wings have been trimmed, you need to check them at least once a month for new growth.

When properly performed, a wing trim should result in a bird that cannot fly, but can glide gracefully to the floor. The bird should not develop any lift in still air. The main purpose of wing clipping is to prevent upward flight in a bird and not to render a bird flightless. A hard fall can result in injuries. Common injuries are leg fracture, chipping of the tip of the beak, and laceration to the keel bone.

A wing clip is best performed by two people: one person to hold the bird, and a second person to perform the clip. The bird should be restrained, either with or without a towel, and the wing should be extended while holding it gently but firmly. The person holding the bird should not put undue pressure on the body. Each bird should be conservatively trimmed and more feathers taken, if necessary, after flight testing.

Here I am holding and clipping by myself, not a recommended practice unless you are experienced and have a bird that is calm and trusts you. I am using a pair of surgical scissors that are blunt on one side and pointed on the other. If I have some one holding the bird for me I grasp each feather to be trimmed and slightly bend it downward so it is possible to get the clippers on the feather, but avoid the covert feather above it. The covert feather is the small shorter feathers just above the long flight feathers. Each feather should be clipped individually. You want to clip the “primary flight” feather, at a point below the tip of the covert feather, but not clip the covert feathers. Remember, it is best to clip conservatively, you can always go back and remove one more if need be, but you can’t undo the cut, once it is done, and it can take almost a year for new ones to grow in. It is recommended that you use a cat claw clipper, or a bird claw clipper, or a rounded end scissors like baby nail scissors. Sharp pointed scissors are not recommended because if the bird manages to get this wing free and flap it, the wing could be lacerated by the sharp ended scissors.

With our Linnies, the first three feathers on each side are usually sufficient. If the bird is a strong flyer, it may take four (4) feathers to slow them down. Conversely for a very young bird that is not practiced in maneuvering and landings may do better with only two feathers trimmed at first. Most avian veterinarians and aviculturists agree that both wings should be symmetrically trimmed. A bird with an uneven number of feathers on each side could spiral out of control, and have a crash landing that result in trauma. I always recommend that a bird going to a new home be clipped. By the time it grows new flight feathers; it will be more familiar with its home and hopefully not be drawn into dangers like open doors and windows.

The Lineolated Parakeet Society is a 501(c)4 tax-exempt non-profit organization.

Caring for Your Linnie

A single Linnie can be housed in a 24 inch cage provided you are giving him “outside of the cage” time.

Linnies need a varied diet. They tend to get a little plump especially if they can’t get enough exercise. However, do not exclude seed from the diet. Limit sunflower and other fattening seeds. Linnies enjoy a variety of fruits and vegetables such as : apple, orange,...

Hand taming, domesticating and learning the behavior patterns of these special little birds will be easier for you if you take the time to do the ever important research. Learn about their habitat, environment, eating and drinking needs, social needs, health concerns, etc.


The Lineolated Parakeet is becoming very popular as a hand raised, hand fed pet. This allows for a pet...